Switch to the dark mode that's kinder on your eyes at night time.

Switch to the light mode that's kinder on your eyes at day time.

Bhutan is a tiny Himalayan Kingdom situated between India and China. It has a population of just over 750,000 people. Bhutan is known for its developmental philosophy of Gross National Happiness. Bhutan believes that the progress of a nation should be measured by the happiness of its people rather than simply measuring a nation’s GDP.

Bhutan was awarded the Earth Award at International Tourism Board in Berlin in recognition of its effort in developing and promoting sustainable and responsible tourism. Bhutan is also a carbon negative nation, it absorbs more carbon than it emits 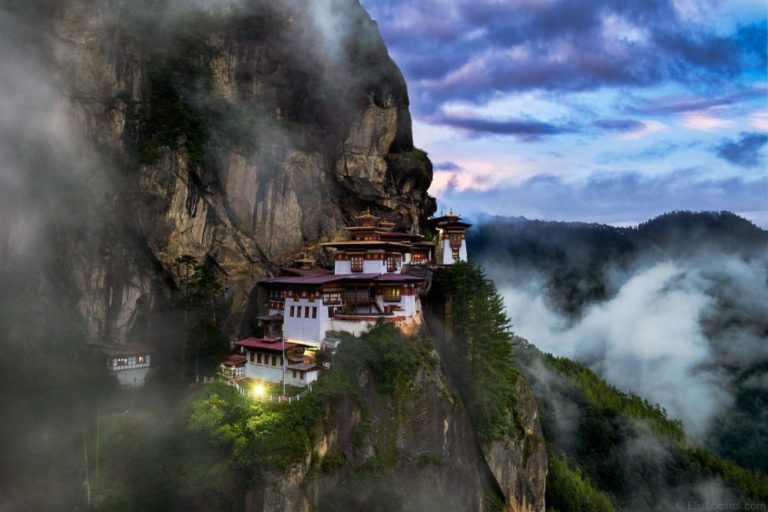 Locally known as Taktsang, the 326 years old monastery is one of the most sacred religious sites in the Bhutan. The monastery is perched 900 meters above Paro valley. Its expansive architectural structure despite the precarious location attracts thousands of tourists from across the globe every year. According to the legend, a 7th century Buddhist saint Guru Rinpoche meditated in the cave for many years to bless the land and he is said to have arrived at the site riding atop a flying tigress. Subsequently the current monastery was built around the cave. Thus the place was named the Tiger’s Nest.

The journey to the top begins at the base of a 900 meter sheer drop cliff. On a clear weather day, a white speck on a vast rocky surface can be spotted from the base. Sometimes due to its substantial elevation, the monastery remains either partially or completely concealed by slow rising mist adding a sense of excitement and adventure to the journey. The monastery is only accessible on foot however pony ride services are available. It is a 3 hour hike up to the monastery.

The trail rises gradually through the pine forests. On the way up, hikers may pass by monks heading to the town to get their supplies. As the hikers approach the monastery at the top, the panoramic view of the valley below and the peaceful ambience are known to induce mindfulness. Hikers also never miss to take a picture with the backdrop of the majestic monastery. It is a must visit destination while in Bhutan. 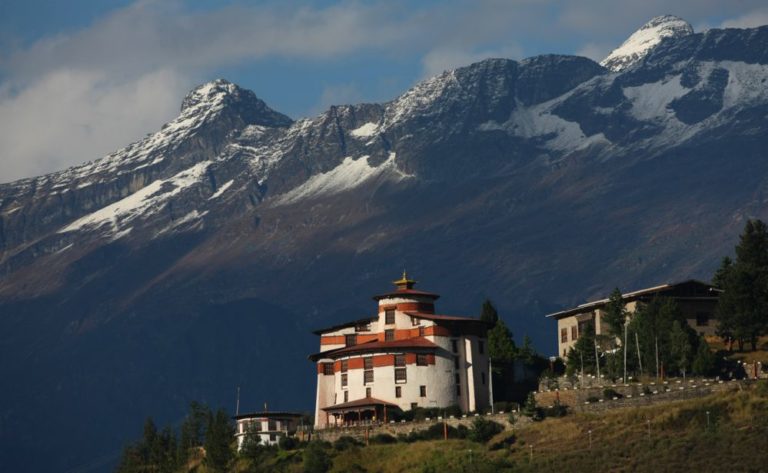 The national museum of Bhutan is housed inside a medieval watch tower in Paro valley. The watch tower locally known as Ta Dzong is located above the Paro Dzong (Fortress). The circular shape structure has a two and a half meter thick wall dotted with traditional windows spread across the wall. The structure like most other fortresses in the country was built without a blue print and without the use of nails.

As per historical accounts, Ta Dzong was used as a prison. Ta Dzong is also said to have an underground passage connecting the building to the Paro River. The secret tunnel was used to fetch water during the times of war. The structure was renovated and inaugurated as a textile museum in 1968 initially and later upgraded to national museum.

A 150 years old traditional house stands out surrounded by modern concrete structures close to the city center. The medieval structure is the folk heritage museum. To promote and preserve Bhutan’s cultural heritage, the house was renovated and restored to exhibit Bhutan’s ancient heritage.

The main structure is a three storied mud rammed house with wooden shingles as its roof. The interior of the house simulates the setting of a 17th century lifestyle in Bhutan. The museum has a collection of ancient tools and artifacts that explains the traditional Bhutanese lifestyle. 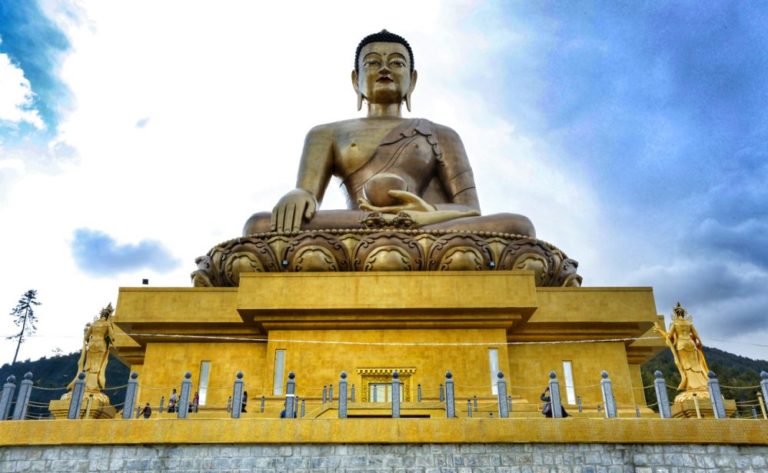 The 51 meters tall Buddha statue graces the Thimphu city. The monumental complex is high up on the hills overlooking the valley. To preserve the sanctity of this place, the entire surrounding environment remains protected. The complex is accessible by road and it is 10 minute drive away from the city center.

The giant statue is casted in bronze and gilded with gold. The face of the Buddha which faces towards the east catches the rays of the rising sun before lighting up the entire city fitting the perfect sanctimonious description. Hundreds of people locals and tourists visit the monument to circumambulate and offer prayers.

The statue houses a three storied infrastructure. It has a large prayer hall curated with 125,000 small Buddha statues. The interior is ostentatiously gilded in gold and exquisitely hand crafted. It is worth taking a tour inside the Buddha statue. 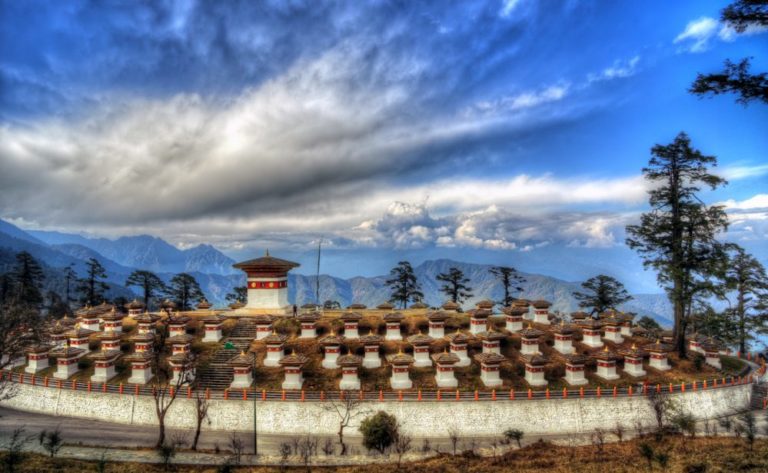 108 Chortens (Buddhist Stupas) add to the tranquility of the mountain pass. It was constructed to honor the King and the military in successfully flushing out the insurgents in 2003. The 108 identical structures are constructed at Dochula Pass. It is 30 minute drive away from Thimphu en route to Punakha.

The Pass has an elevation of 3100 meters and offers an unobstructed view of the entire eastern Himalayan range including the highest mountain in Bhutan, Mount Gangkhar Puensuem. 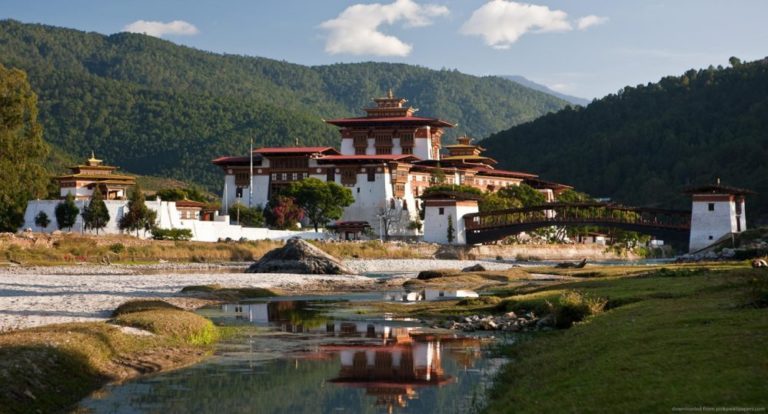 The fortress in Punakha or locally known as Dzong is one of the most beautiful structures of its kind in the country. A local story about the construction of the Dzong has it that the chief carpenter back in the day was instructed to sleep within the vicinity of the site of construction. It is said that the architectural design of the Dzong was revealed to him in his dream.

The impressive structural aesthetics embodies the traditional arts and crafts of Bhutan. The Dzong was constructed in 1637. After the extended civil war ended, the First King of Bhutan was crowned at the Punakha Dzong institutionalizing hereditary monarchy in 1907. Every King has begun his reign by offering prayers at the Dzong since.

The Dzong was built on the confluence of two rivers and it is approached by a traditional cantilever bridge. The six storied central tower (Utse) houses Bhutan’s most sacred relic Rangjung Kharsapani “a self-created image of the Bodhisattva of compassion.” The Dzong also has a big assembly hall graced by a towering statue of the Buddha, Zhabdrung and Guru Padmasambhava

It is here that the spiritual leader Zhabdrung who unified Bhutan was laid to rest. His body is said to have been embalmed and the temple housing his body is off limits to everyone except the King and the Chief Abbot. 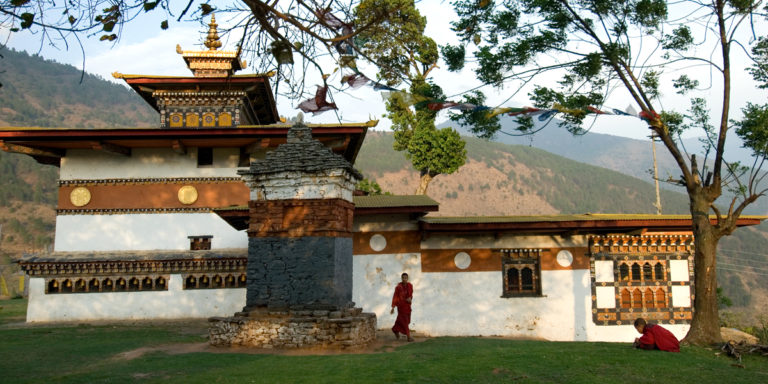 Chimi Lhakhang is an old Buddhist temple in Punakha built in the honor of a Buddhist saint Drukpa Kuenley who lived 500 years ago. Popularly known as the Divine Madman, the saint indulged in alcohol, women and music.

Nonetheless he was revered greatly by the local people of this village and his legacy is celebrated even today. A walk around the village on the way to the temple, tourists will notice that almost all houses have paintings of flamboyant phalluses on the wall. Locals believe that the painting blesses the household members and raises harmony.

Chimi Lhakhang is also known as the temple of fertility. People from across the country and now even popular among tourists visit this temple to offer prayers in hopes of conceiving. The monk at the temple blesses the pilgrim with a wooden phallus. 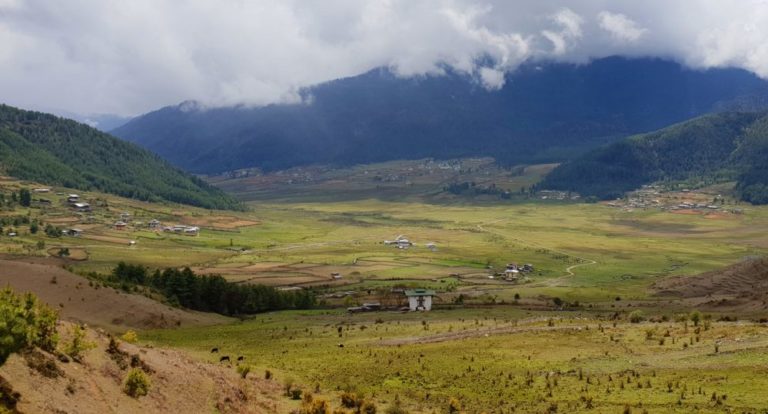 For someone looking to get away from their busy lives and feeling the need to instill mindful living, Phobjikha valley could deliver just that. Phobjikha is one of the most idyllic places in Bhutan. Part of an important wildlife preserve, Phobjikha is home to many endangered species. The vast open marshy land is home to the Black Necked Crane. These migratory birds fly south to the valley every winter from Tibet before flying back early spring.

The village is home to few hundred peasants and monks residing at the 16th century Gangtey Monastery. The monastery has meditation centers open to tourists. The slow paced life surrounded by undisturbed rich natural environment has known to be highly therapeutic leaving tourists physically and spiritually rejuvenated. The village also has multiple hiking and bicycling trails. 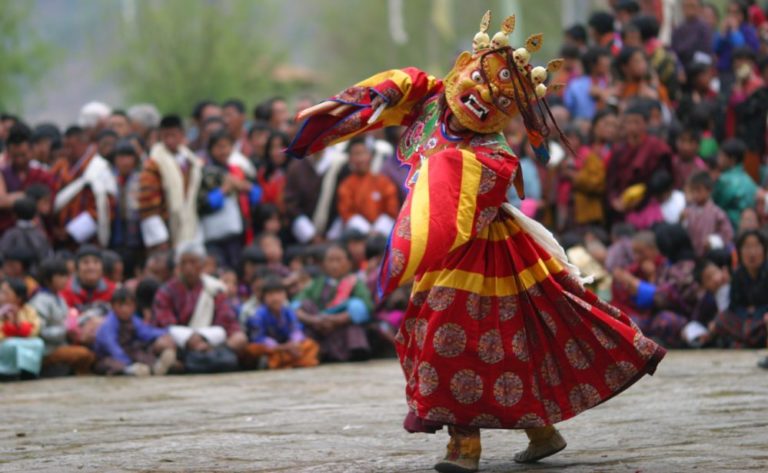 Mask dance festivals or locally known as Tsechu are a religious event celebrated for several days annually across the country. The events are held within or around the great medieval Dzongs (Fortress). The festival honors the 7th century Buddhist saint Guru Rinpoche who is believed to have introduced Buddhism in Bhutan.

During the festival, the monks perform a series of religion inspired dances and chant prayers. It is said that it takes years for the monks to master these dances or Chaams. The monks wear extravagant silk robes and cover their faces with exquisitely hand crafted masks depicting various Buddhist gods and deities while performing Chaams. People from within the region gather at the courtyard dressed in their finest clothes to celebrate the event.

It is also believed that the sacred dances invoke deities to bless the congregation. Intrigued by the visual aesthetics and cultural bonanza, the festival draws thousands of tourists every year from across the globe.

Browse and manage your votes from your Member Profile Page 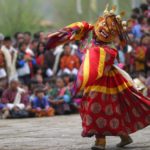 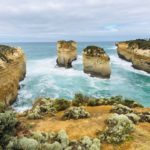